Neither man was born in these parishes – both had moved from their birthplace and settled in the area.

Percy Taylor Broomfield was born in 1885 in Ditton, Kent, to parents Taylor and Emma (née Pemble). He was the youngest of their two children, having an older brother, Ernest Taylor Broomfield (1882-1951). A sister, Ethel Emma, was born and died in 1884. The boys also had a half-sister, Elizabeth Fanny Pemble, born to their mother in 1879.

Percy’s father died in 1893, aged 47. It looks as if his mother was unable to care for her youngest son as 15-year-old Percy was listed in 1901 as an inmate at Princess Alice’s Orphanage in Sutton Coldfield. This was a National Children’s Home (NCH) for destitute children of Christian parents and, unlike other NCH organisations, only took in orphans. Percy’s admission seems unusual, as his mother was still alive at this point and was living in Ditton with her 18-year-old son, Ernest, who was a cement worker. Their sister, Elizabeth, was working as a servant. Their mother, Emma, was admitted to Kent County Lunatic Asylum on 27th July 1908 and died there on 11th November 1908.

By 1911, Percy had moved to Marston Green and was living with his cousin, John Alldridge. He was working as an invoice clerk for a wholesale tobacconist. It’s not known when he joined the Army but he enlisted in one of the three Birmingham Pals regiments, which were formed at Birmingham in September 1914. His regimental number, 831, suggests he was an early recruit. His medal index card indicates that he first served in a Theatre of War on 21st November 1915, less than a month before his death.

Birmingham Pals by Terry Carter includes the following extract from the history of the 2nd Birmingham Battalion written by Captain Charles Bill:

On the following morning (14 December) the Officers and NCOs of both companies (B&D) went into the line at Maricourt for 24 hours instruction and the Battalion suffered its first casualties, two NCOs being killed. (They were no. 870 Cpl Daniel Joseph Greasly, aged 25 from Alum Rock. The other was no. 831 Cpl Percy Taylor Broomfield, aged 31, from Marston Green. Both men were originally buried in a small cemetery in Maricourt. During sometime in the 1920s all those buried there were exhumed and re-buried in Cerisy Gailly Military Cemetery, near the village of Chipilly).

Percy Broomfield’s name is included on war memorials at Marston Green and Bickenhill, as well as Ditton, Kent.

Charles Henry Stone was born in Dudley and was an engine driver before he enlisted with the Dorsetshire Regiment on 7th September 1914, aged 27 years and seven months. He was promoted to Lance Corporal on 14th November 1914, and to Corporal on 2nd May 1915. He set sail for the Front on 13th July 1915 and was killed in action after serving for one year and one hundred days (309 days of which were in England, and 156 with the British Expeditionary Force). A newspaper article notifying his death refers to his parents, Mr & Mrs James Henry Stone, living in Halesowen.

Charles had married Julia Moulton from Saltley at Washwood Heath, Birmingham in 1914, and she gave birth to their only child, also Charles Henry Stone on 9th October 1915 in Duddeston. Julia never remarried and died in Ward End, Birmingham on 10th January 1961. At this time her son was a dental technician. He died in 1989 in Nottinghamshire, aged 73.

Although the only addresses we have for Charles Henry Stone and his wife are in Birmingham, his name is included on the Castle Bromwich village war memorial. However, his name is not included on the memorial in St Mary & Margaret’s Church, Castle Bromwich, suggesting he wasn’t resident in the parish. Given that he was an engine driver, it seems likely that his local connection was through the railway. 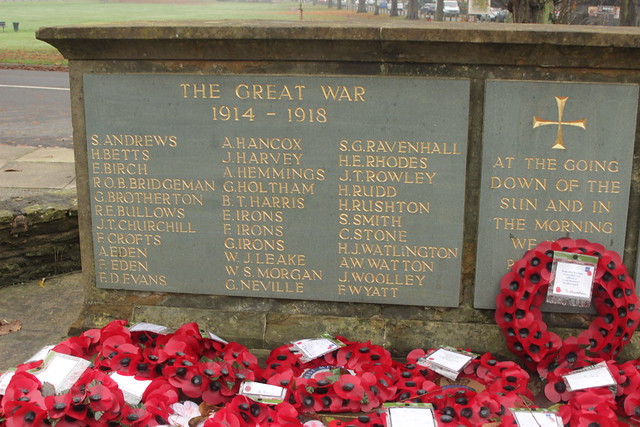 If you have any more information about Percy Broomfield or Charles Stone, please let us know.