Malvern Hall was built some 300 years ago on the site of Malvern Farm. The farm was sold by Robert, Lord Brooke to a Mr Aglionby of Balsall about 1640. Mr Aglionby sold the farm to Job and Ann Murcott in 1657 and they, in turn, sold the estate to the Rev. Henry Greswold (1628-1700) in 1680. It was Henry’s eldest son, Humphrey, who built Malvern Hall.

END_OF_DOCUMENT_TOKEN_TO_BE_REPLACED 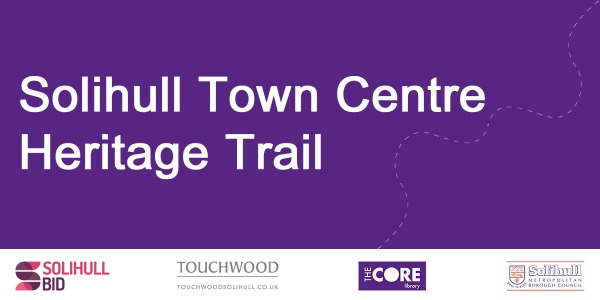 In August 2019 staff at the Core Library researched and produced a new town centre heritage trail leaflet for Solihull town centre – the first time for 20 years that such a guide has been available.

The leaflet was printed thanks to support from Touchwood and Solihull BID. Once services resume at The Core (which is currently closed to visitors owing to Covid-19 restrictions) the free leaflet will be available to collect from there.

END_OF_DOCUMENT_TOKEN_TO_BE_REPLACED 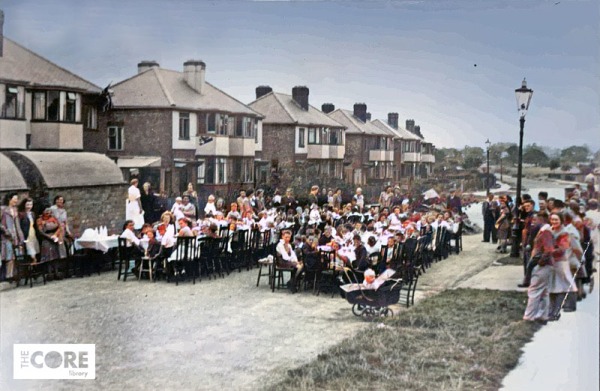 V. J. Day, 15th August 1945, marked the day when the Second World War effectively came to an end as Japan surrendered and all hostilities ceased.

The Warwick County News, 18th August 1945, summarised local events with the headline “Neighbourly co-operation was the keynote of Solihull’s VJ-Day celebrations” and the observation that the day was marked by a “mood of quiet thanksgiving or in the exuberant relief of pent-up feelings according to age or nature.”

END_OF_DOCUMENT_TOKEN_TO_BE_REPLACED

On 13th July 1990 the official opening took place of the new Sixth Form block at Saint Martin’s Girls’ School. The Sixth Form occupied the site of the former stables at Malvern Hall, adjacent to the former Solihull Lido in Malvern Park.

Saint Martin’s School had moved to Malvern Hall, Solihull in 1989 and was the third school to occupy the historic site – the previous two being Solihull High School for Girls (1931-1974) and Malvern Hall Comprehensive School (1974-1989).

In September 2020, Saint Martin’s School will merge with Solihull School, and Malvern Hall will then house its fourth educational establishment – Solihull Preparatory School. It seems timely to look back at the schools that have occupied this stately home over the last 70 years.

END_OF_DOCUMENT_TOKEN_TO_BE_REPLACED

By the time of its demolition in 1962, the grade II-listed Kingshurst Hall, believed to have been built in the early 18th century, was in a state of disrepair. It was surrounded by tower blocks on the new Kingshurst Hall Estate, which was built by Birmingham City Council as overspill housing.

The Council had compulsorily purchased Kingshurst Hall and its surrounding farmland, together with other land in Kingshurst,  under the Birmingham (Old Chester Road, Tile Cross &c) Compulsory Purchase Order 1939, which was dated 17th February 1939.

END_OF_DOCUMENT_TOKEN_TO_BE_REPLACED 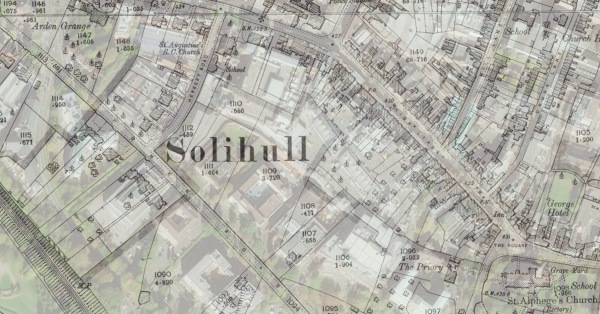 If you’ve ever wondered what was previously on the site of your house, or wanted to find out where your ancestors lived, then historic Ordnance Survey (OS) maps are often a good place to start.

Thanks to the freely available maps of England & Wales on the National Library of Scotland (NLS) website, it’s now possible to see some of the old OS maps overlaid onto a modern satellite image, making it much easier to get your bearings.

END_OF_DOCUMENT_TOKEN_TO_BE_REPLACED

On 20th May 1936, what we would now call a sham marriage, or a marriage of convenience, took place at the office of Solihull’s Superintendent Registrar, which was then situated above shops on the corner of Warwick Road and Poplar Road in Solihull.

The groom was a gay writer living in Dorridge and the bride was a German-Jewish actress. The reason for the marriage was simply to enable the bride to obtain British citizenship. The couple hadn’t met each other before their wedding day and couldn’t actually speak the same language. As far as is known, they didn’t meet again after their wedding day, although they remained married for the rest of their lives.

END_OF_DOCUMENT_TOKEN_TO_BE_REPLACED

On 21st May 2019, in a Poetry On Loan funded event, poet Giovanni Esposito –  a.k.a. “Spoz” – joined library staff and members of the public on a guided walk around the historic heart of the old Solihull village.

After the walk, the participants returned to the Core for a well-earned break and a chat about Solihull’s history, looking at some of the thousands of old photographs in the library’s Heritage & Local Studies collections. Spoz then wrote a poem incorporating people’s suggestions and his own reflections on the local history of Solihull.

END_OF_DOCUMENT_TOKEN_TO_BE_REPLACED

Wednesday 12th May 1937 saw the coronation at Westminster Abbey in London of King George VI and Queen Elizabeth. The date had been chosen for the coronation of King Edward VIII who had become king on the death of his father George V in January 1936. Although, Edward VIII’s abdication in December resulted in a new king and queen on the throne, the coronation date of 12th May was retained.

In Solihull, the event was marked by a three-day carnival, which ran into the Whitsuntide weekend, and many of the villages now in the borough held their own celebrations.

END_OF_DOCUMENT_TOKEN_TO_BE_REPLACED

To mark the 50th anniversary of V. E. Day in 1995, Solihull Libraries collected people’s memories of wartime Solihull and published them in a booklet which was available from the library.

In 2004, to mark the the 65th anniversary of the outbreak of the Second World War, we converted the booklet into an electronic format and made it available as a PDF on the Council’s website.