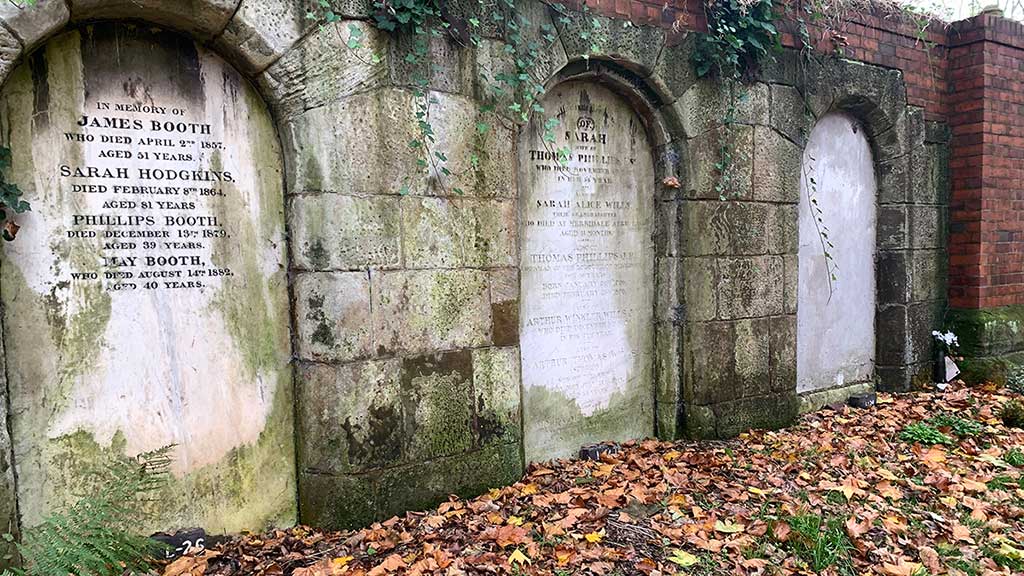 According to various contemporary newspaper reports, at just after midnight on Thursday 19th January 1899, four hearses entered the Warwickshire village of Knowle. Each hearse carried the coffin of a deceased person whose remains had been disinterred (with Home Office permission) from Key Hill Cemetery, Birmingham.

The four people were all related and their remains were interred in a family vault in the churchyard of Knowle Parish Church. By the dim light of a lantern, the Vicar read a portion of the burial service, and the ceremony was witnessed by a police sergeant, overseer and the relatives of the deceased.

The contemporary newspapers made no mention of the names of the family members, and only referred to two of the coffins being dated 1854 and 1857 respectively.

Research by the Friends of Key Hill Cemetery has revealed that the family in question was the Booth family, and that their coffins were removed from the catacombs at the private cemetery in Hockley. However, the dates of death are 1857, 1864, 1879 and 1882, so there appears to be a slight error in the newspaper articles. Those reinterred at Knowle were a man called James Booth, two of his children, and his mother-in-law:

Although the remains of the four family members had been removed to Knowle, the memorial to them still remains at the empty vault at Key Hill Cemetery (pictured above).

Mary Phillips Hodgkins was born on 11th May 1811 and was baptised at Temple Street Independent Chapel, Wolverhampton on 24th May 1811. She was the daughter of John Phillips Hodgkins and his wife, Sarah (née Proud), who were apparently living in Bilston at the time of her baptism.

James and Mary Booth set up home in Edgbaston, and lived in the area until James’s death in 1857, after which time Mary and her four children (aged 10-17 at the time of their father’s death) remained in Wellington Road, Edgbaston, living with James’s brother, Thomas Samuel Booth (known as Samuel). The family moved from Edgbaston to Batts Hill, Knowle c.1878.

On the 1861 census, Samuel is described as the head of the household, with Mary as his wife, but the co-resident children of Mary and James are recorded correctly as Samuel’s niece and nephews. Subsequent census returns record the same children as Samuel’s sons and daughter. Samuel’s will leaves bequests to the two surviving children, James and Samuel Booth, describing them as his nephews.

No evidence has so far been found of any marriage between Samuel and Mary. There may not have been a marriage ceremony as such a marriage would actually have been unlawful in England at the time. The Marriage Act 1835 made it illegal for a widow to marry her late husband’s brother, and this remained the case until the enactment of the Deceased Husband’s Brother Act 1921. However, if such a couple married overseas, then the marriage – if lawful in the country concerned – would have been recognised in England.

Prior to 1835, the marriage of a widow/widower to a sibling of their deceased spouse were deemed “valid but voidable” under ecclesiastical law. This meant that the marriage could be annulled and any children of the marriage rendered illegitimate if any interested parties objected whilst both spouses were living.

Mary Phillips Booth died on 20th March 1895 and was buried at Knowle churchyard three days later. In her will she made bequests to Thomas Samuel Booth, James Booth, and Samuel Tertius Booth.

James and Samuel Tertius were described in the will as her sons, but no relationship was given to Thomas Samuel Booth – he was simply mentioned by name.

(Thomas) Samuel Booth, died on 1st October 1898, leaving his estate at Batts Hill to his nephew, James Booth, with bequests to James’ four children – (Oswald) Godwin, Thora Mary, Osyth Louisa, and Cuthbert Rayner, as well as to James’ younger brother, Samuel Tertius Booth. He also made bequests to various servants, including fifty pounds to his “former servant,” Ellen Fletcher, “now of Fairford Gloucestershire in memory of her faithful services.”

Mary Phillips Booth was survived by two of her four children – James and Samuel Tertius.

James Booth married Louisa Rayner at Edgbaston Parish Church on 14th June 1871 and they set up home at Packwood Haugh House, where they lived until c.1892 when the building was was sold to become a private school. The Booth family then moved to Rowington Hall before moving to Ardencote, Claverdon where they were living by 1911. James died at Ardencote in 1936, aged 93.

Samuel Tertius Booth married Annie Sarah Clarence Bittleston at All Saints church, Marylebone on 16th January 1883. She died on 27th November 1892, aged 46, and is buried in Knowle churchyard. It seems that the couple had no children. By the time of the 1911 census, Samuel, aged 65, was living at Horsham Court, Martley, Worcestershire with 39-year-old Ellen Booth, recorded as his wife of 11 years. However, his will, dated 1907, left his residual estate to “Miss Ellen Fletcher,” which suggests that the couple were not legally married. It’s not known whether this Ellen Fletcher is the same Ellen Fletcher who used to be a family servant and is named in the abovementioned will of Samuel’s uncle, (Thomas) Samuel Booth.

The burial register for Knowle Parish Church notes the burials of James Booth, Sarah Hodgkins, Phillips Booth, and May Booth on 19th January 1899, but simply gives their names, ages and dates of death, noting on each: “Reinterred from General Cemetery, Birmingham.”

The reason for the reinterment isn’t known, but it seems likely that it is linked with the death of Samuel Booth, James’s brother, just three months earlier. Presumably, one or both of James and Mary’s surviving two children – James (1843-1936) and Samuel Tertius (1847-1922) – requested that the remains of their father, siblings and grandmother be removed from Key Hill Cemetery to the family grave in consecrated ground at Knowle.

Under the terms of the Burial Act 1857, it is unlawful to remove human remains which have been interred in any place of burial without a licence from the Secretary of State or, in certain circumstances, the Church of England. It is clear from contemporary newspapers that a licence from the Home Office had been obtained by the Booth family in this case.

Key Hill Cemetery – previously known as Birmingham General Cemetery – was unconsecrated and opened in 1836 as a private cemetery for the burial of people of all faiths and none. Most of those buried there are Christian nonconformists. Guided tours of the cemetery and the catacombs at Key Hill and neighbouring Warstone Lane are undertaken by the Friends of Key Hill Cemetery and Warstone Lane Cemetery. Find out more from the links below.

If you have any further information about the Booth family, please let us know.

© Solihull Council, 2023.
You are welcome to link to this article, but if you wish to reproduce more than a short extract, please email: heritage@solihull.gov.uk