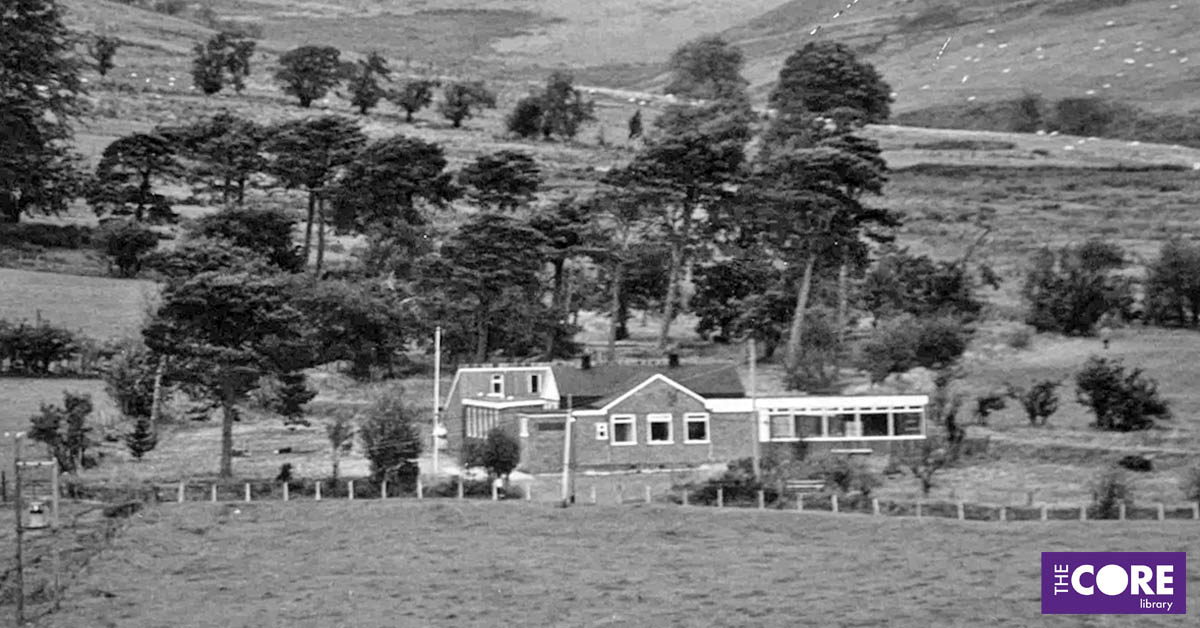 The outdoor education centre was the former Maengwynedd County Primary School in Llanrhaeadr-ym-Mochnant, Denbighshire, Wales, which was situated in the foothills of the Berwyn mountain range.

Purchase by the Parents’ Association

The number of pupils at Maengwynedd School declined in the 1950s and the building became increasingly inadequate so a decision was taken to close the school on 21st July 1961. Pupils transferred to schools in Llanrhaeadr, and the Maengwynedd site was purchased in 1962 by the joint parents’ association of Harold Cartwright and Harold Malley Schools in Solihull, Warwickshire with the aim of running it as an “adventure camp.”

It was in March 1962 that Mr Roland Henry Collins (1915-2002), Headmaster of Harold Malley School, a new boys’ grammar school in Solihull, and his deputy, Mr Hobday, had discussed the desirability of outdoor activities for pupils. Mr Hobday noticed an advertisement in the Birmingham Post for the sale of the Maengwynedd school.

In December 1962, the parents’ association raised £425 towards the cost of purchase and conversion and, in February 1963, a Trust Deed was entered into and ownership of the premises was vested in the association. The limited funds the association had were sufficient only for buying materials so the labour had to be provided by the parents themselves. A call for volunteers resulted in an initial 50 people coming forward, including some with experience in the building trade. A further appeal brought forward 120 names.

The school originally consisted of two small classrooms, a stockroom and two cloakrooms. There was no electricity and water had to be fetched from a pump in the yard. The conversion work took two years and was undertaken by the parents’ association, at a cost of about £1200, with work parties of volunteers regularly travelling the 85 miles from Solihull. The major tasks included:

The Birmingham Daily Post of Monday 27th May 1963 reported on the purchase and the expectation that the centre would be open by the end of the year for groups of up to 15 pupils at a time. Once reconstruction was complete, it was anticipated that the centre would accommodate up to 30 pupils engaged in geography and biology field work and outward bound activities.

In July 1964 the centre was used for the first time by a school party – 12 Fifth Year boys were taken by Mr Green, followed by a Fourth Year group travelling from Harold Malley School in a minibus hired for the purpose. Each group stayed for 2½ days, starting the day with early morning dips in a nearby stream, followed by press-ups before breakfast! Field studies involved soil testing, surveying, general exploration and geographical studies with some geology and biology.

Construction work continued without respite until 1969 but the Harold Malley Mountain Centre was formally opened on Saturday 15th May 1965, with about 250 cars making the 85-mile trip from Solihull for the official opening. The centre was opened by Captain J. F. Fuller, Warden of the Aberdovey Outward Bound Sea School.

Volunteers from the parents’ association continued to work on the centre, spending weekends on improving the accommodation which, by 1967, could take up to 16 children at a time. During 1968/69 discussions took place about extending the accommodation to allow a whole class to visit at a time. The following schedule was drawn up:

In 1970, to mark European Conservation Year, the centre’s name was changed to the Maengwynedd Field Centre. It was noted that the name was more in keeping with the activities undertaken there, and out of respect for the local residents, who still regarded it as Maengwynned School.

On 8th May 1971 an appeal was launched to raise £4000 to extend the accommodation for up to 32 children and to equip the centre with a laboratory for detailed research studies. Working in close co-operation with the parents’ association, students from the Building Department of Hall Green Technical College, Birmingham drew up the plans and constructed pre-fabricated sections for the classroom block which were then transported to Maengwynedd to be erected and finished off by weekend working parties.

The work was divided into three phases:

In October 1971 it was announced that Harold Malley Parents’ Association had won a Prince of Wales award for environment improvement in the Principality as a result of the conversion work it had carried out on the former school. Prince Charles handed over the award to the Chairman of the Association on 1st November 1971.

At some point in their school life, all 600 pupils of Harold Malley School spent a week at the centre, learning to appreciate the countryside and those who lived there. During school holidays and examination periods, the centre was leased to other schools and organisations around the country.

1973 was “Plant a Tree” Year and the Forestry Commission donated 150 trees and shrubs to help with the landscaping of the road frontage. An Open Day was held on Sunday 19th May 1973 when some 300 visitors, mostly from Solihull, enjoyed a sheep dog demonstration, clay pigeon shooting, seeing Welsh rural crafts, as well as seeing the centre’s amenities. The day was so successful that it became an annual event.

As a result of the closure of Harold Malley Grammar School in July 1973, ownership of the centre was transferred with effect from 1st August 1973 to a charitable company formed by interested parents from the school.

The company was called Ysgol Natur Maengwynedd Ltd – the name having been suggested by local farmers. The former Headmaster of Harold Malley School,  Roland Henry Collins (1915-2002) was transferred to Solihull Council’s Education Office as Officer for Special Projects, spending much of his time looking after and developing the Maengwynedd Field Centre. He remained in this role until he retired in 1980.

The centre was then run on a non-profit-making basis for the benefit of youngsters from schools and other youth organisations. Preferential bookings were given from those coming from within the Solihull Metropolitan district. Members of the charitable company provided working parties to carry on with tasks such as carpentry, painting and decorating, landscaping, plumbing, plastering, bricklaying, transport, secretarial, domestic and social activities.

Teachers were encouraged to work together to carry out a methodical survey of the Valley, documenting and preparing suitable field studies material for leaders of all parties to use at the centre as needed.

In November 1976, a substantial grant was received from the Manpower Services Commission for a job creation programme to enable the completion of the dormitories and store rooms, building a new toilet block, renovation and redecoration of the inside and outside of the main building, improvements to the drainage and water systems and landscaping of the whole site. The grant enabled the work to be completed during 1977.

By 1989, it was being reported that the activity centre was struggling financially, with outstanding loans of £18,000 and bookings being only at around 30 per cent of capacity. Solihull Metropolitan Borough Council agreed to take over the centre in 1990 and spend £30,000 on it, believing that professional management would see it become financially solvent again. At this point, the centre could accommodate up to 40 students and offered facilities for orienteering, canoeing, caving, rock climbing and abseiling.

In April 1999, 31 of the parents involved in the original working parties to convert the old school returned to Maengwynedd to see the centre which now included 14 bedrooms, showers, toilets and drying rooms.

The centre closed in 2006 after proposals to extend the site using funding from the Big Lottery Fund fell through when the Council’s planned partner withdrew from the project. The intention had been to demolish the existing centre and replace it with a new building that could offer full respite care facilities. The estimated cost of the project was £1,255,371 and a conditional grant of £170,000 was secured from the Big Lottery Fund.

Much of the information from this blog post came from the records collected by the former headmaster of Harold Malley School, Roland Henry Collins, which he donated to Solihull Central Library. He also donated some documents relating to Maengwynedd to the outdoor education centre. The whereabouts of these papers since the centre’s closure are unknown, so we’d be grateful for any further information.

If you have any memories of visiting the centre or any further information about it, please let us know.

My brother and I were pupils at Harold Malley and Harold Cartwright Schools in the early 1960s and our parents were PTA Committee members. Both schools were newly built at the time and we were some of the first pupils.

Mr Collins was the head of the boys school but the girls school was built first. So initially the boys and girls were housed…in separate classes… in the same building with Mr Collins and his staff in charge.  Three years in, the boys school was completed and the staff and boys abandoned us girls and Harold Cartwright started out with its own head teacher and new set of staff.

Along with several of the other (mainly from the boys’ school, Harold Malley) parents, our mum and dad were involved with the fundraising and works associated with the Mountain Centre.

My dad used to go, probably once a month, for the weekend during the summer in the first few years. Another parent drove them there, as my dad didn’t drive. He didn’t have any building skills to offer…but went as the cook!

His view that was without him there to feed them, the work wouldn’t have got done! He did the budgeting and purchasing of provisions as well as the cooking on whatever stoves etc. they could find.

I believe they bought local produce, eggs, milk etc. from the local farmers and took dried and long term foods with them..

Fundraising continued back at the school with other parents and the physical work continued at the Mountain Centre.

They were a group of parents with mixed skills who worked together with the staff from the school on this monumental project. They were great team and many friendships were established between the parents.

I did go a school trip there with a small group of girls from my year group and we just slept on the floor in sleeping bags as it hadn’t really been fully equipped at that stage.

We went by train but I don’t recall how we were taken from the station to the village.

The one thing I remember is going pony trekking up and down steep pathways in and around the area.

© Solihull Council, 2021.
You are welcome to link to this article, but if you wish to reproduce more than a short extract, please email: heritage@solihull.gov.uk