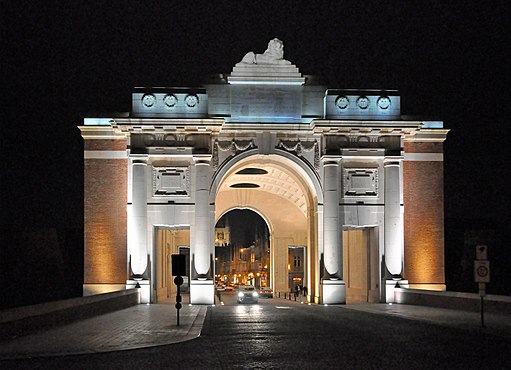 Two local men were killed in action on 30th October 1917, both of whom were serving with the Canadian Infantry and both are commemorated on the Menin Gate, having no known grave. The two men were Private Frank Everard Harrison, and Private Aubrey John Kirby.

Francis Everard Harrison was born in Wednesbury, Staffordshire on 7th June 1883. He was known as Frank and was the youngest of the four children of parents Hans Harrison (a draper from Ireland) and Mary Anne Sainsbury Gilroy who had married at St Peter’s Church, Wolverhampton in 1875. Two of their children – Hans Crosby Harrison (1877-1884) and Lillie Alice Harrison (born and died 1879) – died young. Only their eldest daughter, Florence Annie (born 1876) and youngest son survived to adulthood.

Frank does not appear on the 1901 census as he had enlisted in the Army and was serving overseas in the Boer War with the 103rd (Warwickshire) Company 2nd Battalion Imperial Yeomanry. Army records state that he completed 12 years serving with the South Staffordshire Territorial Force.

By 1911, Frank had become his father’s assistant in the drapery business, which by now was in Solihull High Street. However, he emigrated to Canada in 1913 and married Annie Lowndes Banks in Vancouver in 1914. In September 1915, he enlisted in the Canadian Infantry, giving his occupation as engineer. He arrived back in England in May 1916 and attended the School of Farriers, Aldershot, where he became qualified in performing the duties of a cold shoeing smith. In August 1916 he embarked for France.

He was killed in action on 30th October 1917 and is commemorated on the Ypres (Menin Gate) Memorial. He is also commemorated locally on Solihull war memorial.

Aubrey John Kirby was born in Catherine-de-Barnes on 3rd August 1889, although his attestation papers for the Canadian Infantry give his birth year as 1890. He was the fourth of the 11 children of parents John (a labourer) and Mary Keatley (née Tranter) who had married at Barston in 1886.

Aubrey emigrated to Canada in 1909 aboard the Empress of Britain. He bought land in Winnipeg in September 1911 and it seems that he called his farm “Tranter” after his mother’s maiden name.

After the outbreak of war, he enlisted in the Canadian Infantry on 15th December 1915, arriving back in England in September 1916, before embarking for France just after Christmas 1916. On 23rd August 1917, he was admitted to a field ambulance suffering from a fever (Pyrexia of Unknown Origin (PUO)). He was discharged to duty on 1st September 1917. He was posted as wounded and missing on 30th October 1917. On 13th April 1918 he was officially presumed killed on or since 30th October.

His name is commemorated on the Ypres (Menin Gate) Memorial and also locally on Berkswell war memorial.

If you have any further information, please let us know.