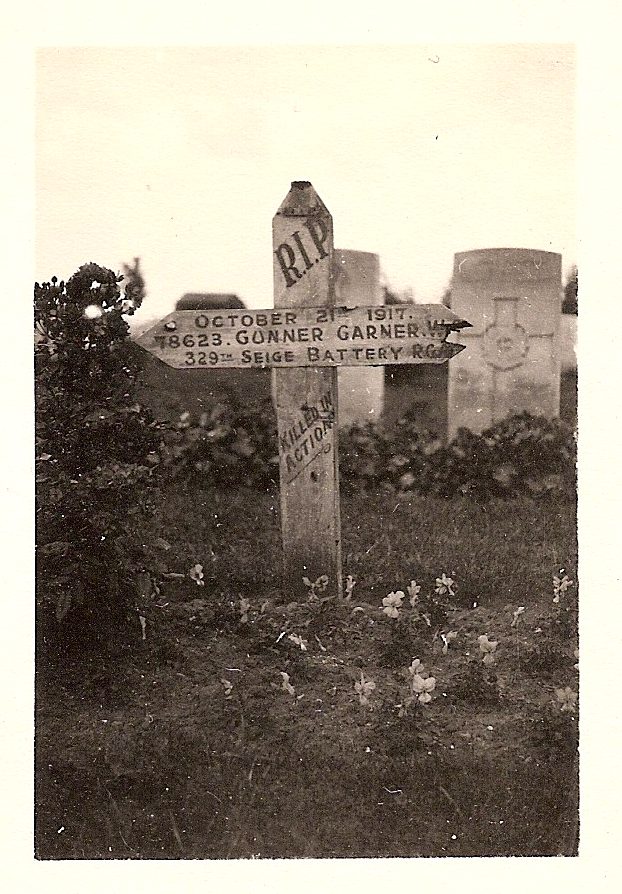 19-year-old Gunner Reginald Dare Day, an Old Silhillian, was killed in action on 21st October 1917 whilst serving with the Royal Garrison Artillery. Solihull School during the First World War by John Loynton indicates that he was born in 1899 and entered school in 1910, leaving in 1913 after having passed the Preliminary Oxford Local Examinations.

He didn’t actually serve under his own name but, instead, served under the name William Cartledge Garner. This is quite clear from the Register of Soldiers’ Effects, which includes the name of 78623 William Cartledge Garner with an addition underneath in different handwriting: “alias Reginald Dare Day”. His next of kin is given as his brother, Andrew S. Day.

Reginald Dare Day was the youngest of the four sons of brewer John Hamilton Day (1848-1912) and his second wife, Sarah Ellen (née Cutler), who was born in Alvechurch in 1848. None of the four children appear to have had their births registered, and nor do they seem to have been baptised. The reason for this is likely to be the rather unusual situation of the parents.

John’s birth name was John Sterling (or Stirling) Day, and he was born at Portsea in 1848 to parents, John (a land surveyor) and Mary Julia (née Bluett). The name Sterling/Stirling was derived from Mary’s family – the Bluetts of Holcombe Court, Devon. Mary’s father was Captain Buckland Stirling Bluett R.N.

21-year-old John Stirling Day married 18-year-old Emma Marshall in 1871 in Horley, Surrey, and they are known to have had two sons, John Leonard Stirling Day (1877-1942) and Norman Buckland Day (1880-1962). The children were both born in Oldham, Lancashire, where John had been in partnership with William Kerr at the Waterloo Brewery until the partnership was dissolved in July 1875. It also seems that John and Emma had a daughter, Madeline Day (born 1875).

In November 1885, Emma Day petitioned for a divorce on the grounds of her husband’s cruelty and his adultery with “Nellie Cutler” following his desertion of his wife in December 1882. The divorce was granted and the decree absolute was issued in November 1886. Emma then remarried in 1888, and died in 1928, aged 75.

Although John was free to marry once the decree absolute was issued, he and Ellen continued to live together, although they described themselves on census returns as married. They finally married in 1905. The births of their four sons between 1890 and 1898 don’t appear to have been registered, presumably to avoid difficult explanations owing to the parents not being married. The children were:

The boys’ father, John Hamilton Day, died on 14th February 1912 and, although he left an estate with a gross value of £8082, this was reduced to a nett value of £331 12s 8d once debts and funeral expenses had been paid. His will left bequests to his widow and the four sons from his second marriage but made no mention of the children from his first marriage.

As a result of the nett estate being lower than anticipated , his sons, who had apparently had expectations of living as gentlemen, had to make their own living. All four are known to have served in the Armed Forces.

Jack Hamilton Day joined the 10th Hampshire Regiment and had become a Corporal by 1918, before being discharged to commission (Lieutenant, Yorkshire Regiment) in September 1918. After the war, he went on to work for the Imperial War Graves Commission and was awarded the MBE in the Queen’s Birthday Honours 1952. The photograph of the above grave belonged to Jack Hamilton Day and apparently has writing on the reverse that says “Dare’s grave”.

George Stirling Day, who also used the names George Hamilton Day, George Hamilton, and George Stirling Hamilton Day, became a book-keeper. However, after working as a clerk for a cycle company in Birmingham, he became unemployed in October 1913, and turned to crime. He disappeared from his mother’s house, and was found in Worcester, where he was convicted in March 1914 of obtaining goods by false pretences. He was sentenced to six months’ imprisonment, and seems to have emigrated to Australia shortly after his release, as he enlisted in the Australian Imperial Force in September 1915. Having gone absent without leave and escaped from his escort when he was due to embark for overseas service, he was discharged from the Army in May 1916. George spent the rest of his life in Australia, and had further encounters with the criminal justice system in the 1930s.

Andrew Springfield Day joined the 2/6th South Staffordshire Regiment in June 1915 but was discharged in November 1915 as medically unfit for further service. Between 1920 and 1921, he moved to Liverpool, where he married Catherine Elizabeth Lee in 1921 and died, aged 45, in 1939.

Without a birth certificate, it’s difficult to be sure why Dare Day served under an alias. Census records suggest a date of birth of 1898/99 so it is possible that he was under age when he joined the Army.

There was a real William Cartledge Garner, who was born in Bunbury, Cheshire on 28th August 1890. He became a quantity surveyor and local councillor in Buckinghamshire after spending time in Moseley, Birmingham c. 1911. He died in Bedford in 1974, aged 84.

It’s known that Andrew Springfield Day also lived in Moseley at the same time as members of the Garner family, so it seems likely that the two families knew each other. The 1920 electoral register also shows Andrew Springfield Day living in the same house – 85 Woodstock Road, Moseley – as William Percy Garner. It’s possible that William Percy Garner (1882-1959) was a relative of William Cartledge Garner.

An announcement of Dare Day’s death appeared in the Birmingham Daily Post 29 October 1917:

Gunner Dare Day (19), Royal Field [sic] Artillery, was the youngest son of the late Mr John Hamilton Day, Green Bank, Hall Green. Educated at Greenhill School, Moseley, and Solihull Grammar School, he joined the artillery at the age of 18, and had been in France about twelve months. He was killed in action on October 21. Of the late Mr Day’s four sons one has been killed, two are on active service, and the fourth has been invalided out of the army.

Although Dare Day is buried at Menin Road South Military Cemetery, his gravestone bears the name of W. C. Garner. The only known memorial on which he is commemorated under his real name is Solihull School memorial. We put together a case for the Commonwealth War Graves Commission to consider, which they accepted. They updated their records and Dare Day does now appear under his real name in the Debt of Honour Register. In due course, the headstone of Gunner W. C. Garner will be similarly amended so that, a century after his death, Dare Day’s grave will bear the correct name.